The Shawangunks comprise the most popular and extensive rock climbing in the eastern United States. Located 1.5 hours from New York City in the Catskill 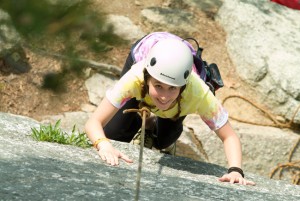 mountains outside the town of New Paltz. The cliffs of the “gunks” have been reserved for climbing and many other public uses through the generosity of the Smiley family, whose Mohonk Mountain House Retreat Hotel was founded in 1869.

With the rich and complex history of the area it is clear that since the late 19th century people have sought out this area and its cliffs for a variety of recreational activities. Rock climbers originally from Europe, who moved to the US, first began to explore these cliffs in the mid-1930’s. 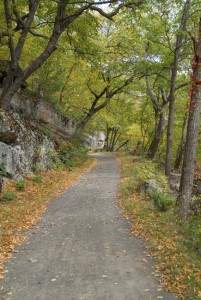 The particular geology of the cliffs and ease of access has contributed to the development of the “Gunks” as a major climbing center.

In addition to climbing, the area lends itself to several other outdoor activities including cross-country skiing and mountain biking on an extensive network of “carriage roads”. The area is well-known as a major fly-way for migrating hawks and other birds. Hiking the backcountry of the “Gunks” will often take you to isolated spots where you will not encounter another party. That’s fairly unusual less than 100 miles from New York City.

For beginner climbers the climbing here is unrivaled. For the expert the gunks comprise many classic test pieces and these beautiful cliffs are a great location to learn the art of traditional climbing and gear placements. Mountain Skills Rock Guides can set you up with a guide to take you up fun routes and teach you many techniques, tips and tricks along the way.

Check out the new Camping at the Mohonk Preserve

Call or  e-mail to book your next trip to the “Gunks”.

*John Maier is a professional photographer/climber. If you would like to hire him to join you, your family, or group to take photos on your rock climbing adventures in the Gunks, please let us know.

The location could not be found.